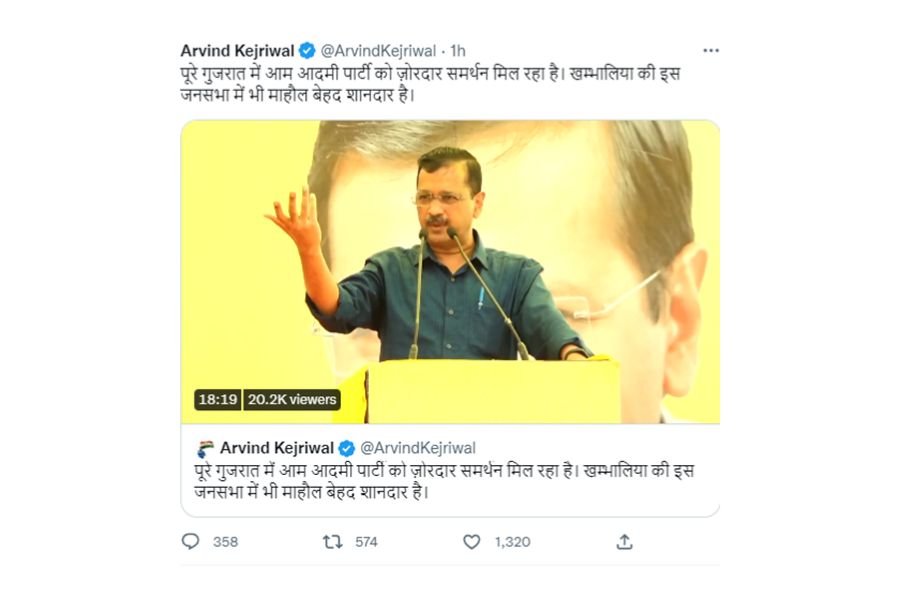 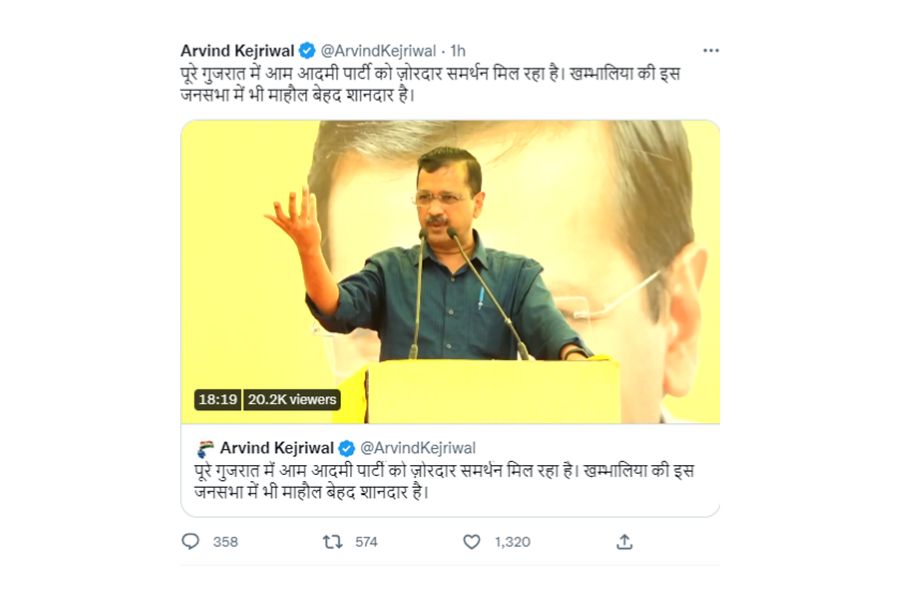 While analyzing the data CheckBrand thoroughly worked upon all of CM’s digital media presence and hence placed “Arvind Kejriwal” at the top of the list of CMs. He has had a significant impact on the online world after sitting on the chair of CM of Delhi thrice in a row. With 26.1 million followers on Twitter, 1.5 million followers on Instagram, and 9.1 million followers on Facebook, Mr. Kejriwal has a significant online presence. As per sentiment analysis Delhi’s CM has received 87.1% positive & 7.1% negative reviews. In the online community, Mr. Arvind Kejriwal enjoys a good popularity rating. His Twitter account is consistently active and interesting, according to CheckBrand.

With high positive sentiments across the web, his recent tweet analytics depict that people are praising him for being a strong leader in Gujarat elections and for his efforts to uproot BJP there. The tweet received 105.6K views making his presence stronger on social media.

In this decade, Delhi’s streets are echoed with the phrases like “Paanch Saal Kejriwal”, “Lage Raho Kejriwal” & “Ache beete 5 saal, lage raho Kejriwal” CM Kejriwal has taken on the challenging task of reducing corruption in India by using the more popular strategy of garnering the support of the population. He believes in the philosophy of “change begins with small things”.

Through an Instagram post that received an amazing digital engagement, he pointed out the “ruling party” on social media, which helped to improve his online reputation and helped in landing him top spot in the CheckBrand CM catalogue.

CheckBrand researched more on Mr. Kejriwal’s online presence. He has over 195,825,066 YouTube views and 343 K subscribers, which is one of the things that contribute to his present position in CheckBrand. On YouTube, Mr. Kejriwal posted a video in which he discussed his goals for the nation. His YouTube popularity was enhanced by the nearly 38,000 views it earned. Mr. Kejriwal’s roadshows during the most recent campaign for the Gujarat elections helped him forge a unique place in people’s hearts, which eventually increased the impact of his presence online. The populist policies of the Arvind Kejriwal-led administration, including the power and water subsidies, the Mohalla clinics, and the improvement of Delhi’s educational system, have made him one of the city’s most popular chief executives. In the Delhi MCD elections, AAP benefits from his promising reputation.

CheckBrand, deep dived into the data and studied the key metrics using our algorithm and hence concluded that “Yogi Adityanath” attains second digital ranking in CheckBrand’s CM catalogue. His impact on online presence is highly commendable whether it is setting new trends or connecting with the public. The kind of attachment, faith, respect and loyalty he receives from the people is immense and limitless as these emotions are reflected on his digital presence as he has over 22.5 Million followers on Twitter. With an average of 1000 views on his videos on his YouTube Channel, he manages to create a huge impression on online presence. As analysed by CheckBrand, he has gained 85.1% positive sentiments on online presence. He has been mentioned 493.2K across the web. This data has made him place in Top 5 CMs in Digital Media, further increasing his Brand Value to 50.1 Crores.
Yogi Adityanath — ‘curious man’ who became firebrand leader made history with 2nd term as UP CM, he knows how to build a connection with people at digital media. He is extremely active on social media and tweets in different languages.

Shivraj Singh Chouhan has a 29.9 Crore brand value and ranks third digitally among the CMs according to CheckBrand’s popularity index. He has gained popularity as a leader on social media because of his strong communication abilities and keen understanding of socioeconomic and political concerns. His CheckBrand Analysis shows 12K digital engagement with a positive sentiment score of 55.9% overall. In the last few days, he has been searched 9851 times and referenced 146.3K times on social media.

The first female chief minister of West Bengal receives a brand value of 23.79 crores. As a monitoring tool, CheckBrand examined all of the social media sites and evaluated her online presence. She frequently makes headlines and appears in tweets because to her remarks and disagreements with Prime Minister Narendra Modi. CheckBrand calculated that Mamata Banerjee had a 220.4K digital engagement with audiences. Sentiment analysis depicts 30.8% positive and a 69.2% negative review ratio. According to the study, Mamata Banerjee holds a digital ranking of 4 in the list of top Chief Ministers.