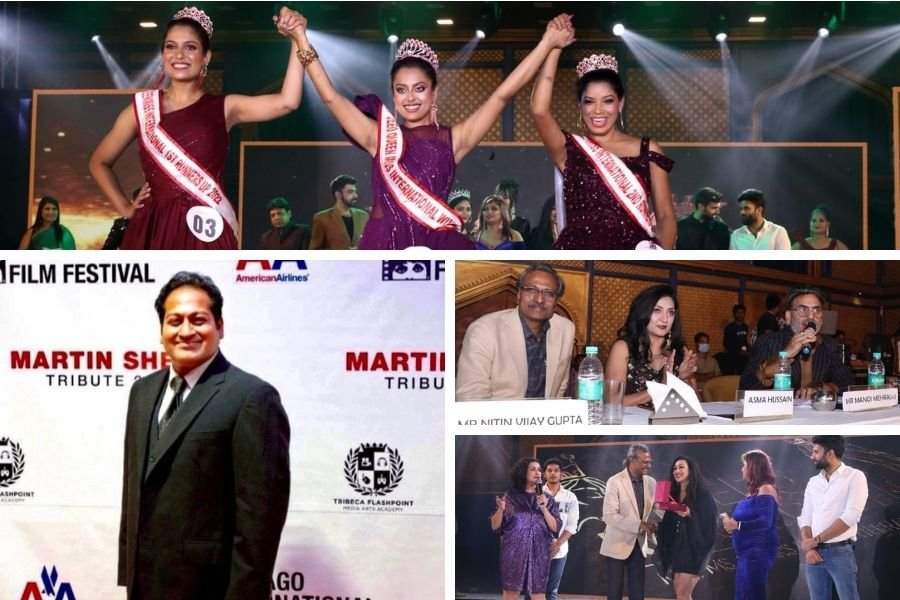 May 23, 2022By dsprimeLeave a Comment on Kolkata witnessed the culmination of the mega finale event of Jeeo King & Queen Mr./Ms and Mrs India International Season -2 23rd May 2022: Kolkata witnessed the culmination of the mega finale event of Jeeo King & Queen Mr./Ms.And Mrs. India International Season -2, which was presented by Columbaas Digiplex at Holiday Inn in Kolkata in the presence of Bollywood Actor Director Arbaaz Khan, Bengali Superstar Rituparna Sengupta, Director Subhrajit Mitra and Mr. Manoj Mehra, Asma Hussain and other eminent guests. Debjani Mukherjee was conferred as the Pride of the Nation, Neha Singh as the Global Queen and Shreya Thakur as Teen Queen.

The spokesperson Sukanya Gupta mentioned that The Pageant seeks to offer a platform for all Iconic men and women to showcase their uniqueness in personality, Talent, Confidence & Intelligence. Jeeo King and Queen believe in bringing remarkable Achievers to present their true unique selves. As an organisation, they believe that nothing could stop you from reaching new heights and setting new milestones if you are passionate about it. Age is just a number. What counts is the effort and the approach towards someone’s goals. In just 2 seasons, they have contestants from 10 plus countries globally.

Globally renowned Grooming Coach and Show Director Liza Varma, who was one of the celebrity groomers of the event, mentioned that she was extremely happy with the standard of the participants and also with the organising team.

The pageant journey was filled with glamour and intellectual life. Shainee Soni famous Bollywood stylist who is the winner of the Miss Transgender title this year and representing India in the Miss Transgender universe informed that the Finalists were physically and mentally groomed and trained. They created awareness via advocacy, were challenged with high fashion photoshoots, and runway shows showcased their talent and created empowerment.

Jeeo King & Queen Pageant have shortlisted the top 29 finalists from around the globe, as the pageant crowned its second-ever “Mr., Ms. and Mrs. International. All the contestants went to Phi Phi Island in Thailand to have the photoshoot and video shoot and the grooming sessions began there itself.

Along with the contestants, the highlights of the Kolkata event were the amazing outfits presented by the designers like Asma Hussain from Lucknow (women’s ethnic wear), SBJ from Delhi (men’s ethnic and western) and Nikhil Jain from Kolkata (Evening Gowns Women’s Western Wear).

The crowns for the winners were designed by eminent jewellery brand The Jewelounge from Delhi by Nitin Vijay. Hollywood Executive Producer Joey Majumdar from Los Angeles gifted all the participants exclusive items from luxury brands. He also promised to give opportunities for modelling to all deserving candidates in Charity Shows in the USA. Pooja Vyas from Nagpur was crowned Jeeo queen Mrs winner. Neelam Singh from Muscat and Ravinder Kaur from Delhi were joint First Runners up. The second runners up were Shalini Parupudi from Bangalore, while Mrs Neha Singh Gupta from Dubai was crowned as Jeeo queen International Mrs Global Queen.

In the Miss Category, Bengali girl Debasruti Saha from Bangalore won the title Jeeo queen Miss International, and Runners up were Ashima Sood from Smalltown Guna in MP and Kanti Gari from Mangalore, who is an Airhostess and comes from a tribal background, won the second runners up title

In the Mr category, the Jeeo king Mr International title was won by Pawas Khatri from Delhi and the first Runners up was Soumalya from Kolkata and Mithil from Mumbai was the second runners up.

The videography for the event was directed by Susanta Sarkar and executed by Soumyadeep and Sayan. The Photoshoot was done by famous photographer Rony Kaula.